It should not have been a hiking day.  Why?  Because there is a house waiting to be put on the market and my job was to paint doors and a myriad of other chores.

However, I don’t see my sister very often because of conflicting schedules…and sometimes just pure laziness or maybe it is selfishness.  There I said it…it sounds horrible.  Go ahead and frown at me!  My sister, Mytyl, is my twin separated by six years.  We were born on the same day and have always, I think, been pretty close.  She is closest of all my siblings (there are 8) to me geographically, as well, living only 15 miles south.  So it is pretty disgusting that we don’t get together more often.

But, oh God, when we are together we have a ridiculous amount of fun! No, more than fun.  It is like everything is just so freaking hilarious.  It is like therapy for sisters!! 🙂

So, when I found out that she COULD and WOULD go hiking this weekend I immediately said “F. the house for a while! Bring the girls and let’s go check out Cedarville State Forest in southern Maryland. I can paint later tonight!”

We arrived at Cedarville SF at about 10:30 am.  Rain was in the forecast so I was happy to find the sky still relatively clear.  It was a self-pay lot, $3, and because 1) I am honest, and 2) I like supporting the parks, I happily deposited a $5 bill into the envelop.  Mytyl was returning from the park office when I returned to the car to put on my hiking boots.  I asked if she had gotten a trail map.  “No”, she replied, “you have to pay $3 for one.”  “huh??? I just paid the entrance fee, why do we need to pay another $3?  Surely, this is not the case!” and I decided to go find out for myself what the deal was.

Turns out it is $3 for the entrance fee and another $3 for the trail map.  The map is nice!  One of those made with the paper that holds up in the rain…I didn’t mind paying for this as I would be planning a few Trail Dame hikes down here in the future!

Map in hand we started down the Holly Trail.  The forest is spring green and although the day was a little muggy, the temperature remained reasonable for hiking.  My nieces were great explorers and we gave them the time to look, listen, discover and pick up a few ticks along the way! 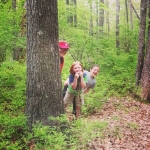 My sis and nieces on the Holly Trail 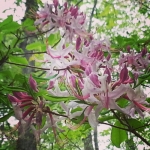 The trail is pretty level, with no rocks and no significant elevation gain.  This is because Cedarville SF is very near to the Chesapeake Bay.  This is sandy terrain pot marked with swampy areas.  Not a place I would want to be in the middle of the summer, but on this day it was very pleasant!

We followed the Holly Trail behind the Park office until it split, one branch headed left and one to the right.  We took the trail to the left and quickly found ourselves entering an open field with the powerlines.  Entering the woods again, we passed over a road and began our gradual descent into the swamp.  How COOL!!!  This is so different than hiking in western Maryland!

The girls were having a great time!  We explored the swamp and they pointed out the beaver dams and the trees that had been felled by the beavers.  One of my nieces had a camera and took her time documenting all that she saw.  From the smallest frog to fungi on trees…snap, snap, snap…she meticulously got her shot! My other niece took pride in learning to read the trail map!  I was so proud of my nieces for taking the time to look and really take in the forest life.

Hiking with kids is awesome!  They aren’t always interested in what you think they might find delightful…so let them take the lead and set the pace!

After an hour or so we stopped for a picnic at a group of tables by an old kiln.  My sister spotted an Eastern Bluebird and a bird house.  She thought there was probably some babies in the bird house, so after our lunch we held up our phones to take a picture inside the bird house…babies!!! 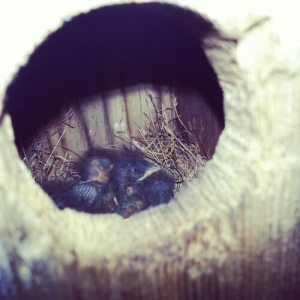 During our hike the sky had clouded over.  Walking back to the car, the sky opened up and the rain poured down.  Were we wet? yes.  Did we have a great time anyway?  Oh yeah! 🙂 🙂 🙂