Semester over, I jumped on my escape vector … I70 West to Indiana!

Most of my week was spent visiting with my sister, Rowena, in Bedford, and my Mom’s house on the farm in Springville. Tuesday, however, was reserved for hanging out with my son, Logan, who had the day off of work!

Logan met me at the Bloomington transit center after taking the bus down from Indianapolis. On the way up to the transit center, I had stopped off at Kroger for a few snacks…a tub of hummus and loaf of pita. We were set!

Off to McCormick’s Creek State Park! This is Indiana’s first state park established in 1916 and lies just off of Highway 46 between Bloomington and Spencer. I must also add that this is the first state park I ever remember visiting. I remember a family reunion at which I was allowed to drink whole bottles of pop WITHOUT sharing with anyone and a playground that included a “tornado” slide. 🙂

My son had never visited this park and I had never done any hiking here, so this was a great opportunity for both of us!

We pulled into the gate, paid our $7 entrance fee, and found the trail head for Trail 5 to Wolf Cave. I believe I have mentioned the pragmatic trail naming in another post about a visit to Indiana State Parks… 😀

This trail is wide, flat, and impeccably maintained. I heard that one can rent an all terrain wheel chair at this park and go out on the trails in it. Impressive! Now, that I see the condition of the trails, it makes a lot of sense! Although, there are a few places along this trail that could be challenging regardless. 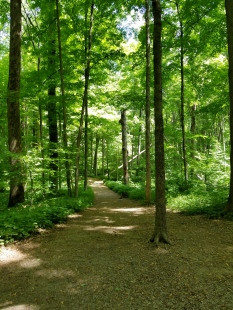 We started down the trail, admiring the sinkholes on either side of the path. Significant dips, honestly, it makes you wonder about the ground you are on! Sinkholes are typical for the southern Indiana karst landscape. This is limestone country and this park contains a limestone canyon, complete with waterfalls and interesting rock formations.

Reaching Wolf Cave, it looked unimpressive to me. A slit of an opening down low on the hillside. We crouched down and entered the cave. Ahhhh, a small puff of cool air hit my face, nice! We pushed a little further into the cave but did not go through to the other side because the opening requires a bit of wiggling…yeah, not really into the claustrophobic squeezing through small openings things. So we backed out crouching, into the sunlight, saying goodbye to middle earth for the moment.

The trail took us around the hill and descended down to a creek on one side. Then, oh wow, the back of the cave loomed on the hillside! A natural bridge opening with chambers that jutted off to either side. This is beautiful! I would love to see it after a hard rain as it looks as if the water runs right out of the cave into the creek. Absolutely gorgeous area! 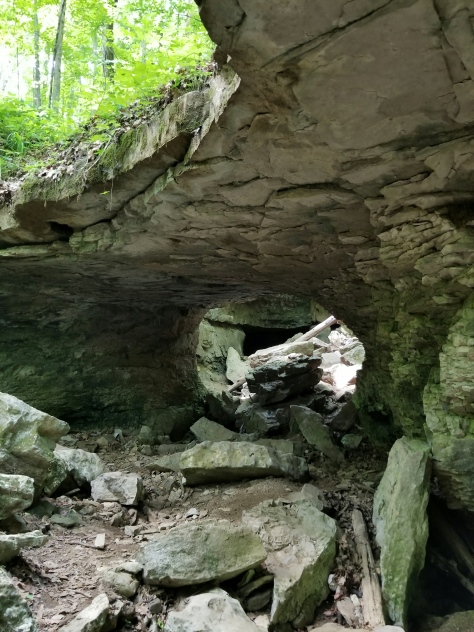 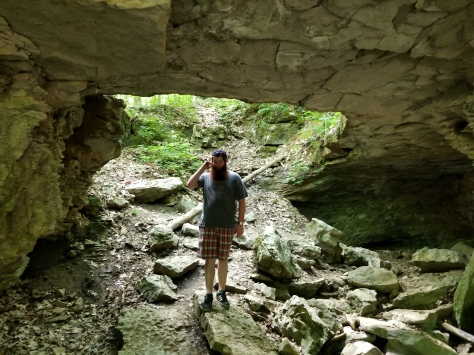 We spent some time exploring before trudging back up the hill to the car. It was now getting muggy, so we took a short break before heading across the road to Trail 7 that would take us down the hill to the White River.

Trail 7, another beautifully kept trail, follows the edge of the canyon on its way down. There is one steep, rooty part of the trail, just before the river, but it is short and at the bottom, one can take a left to take Trail 10 across the creek and beyond. Of course on the way down, I managed to start choking on a bug that had made the unfortunate decision to plunge itself into my throat. That was seriously unpleasant and no amount of drinking water was washing that bastard down! I was tearing up, choking up, practically throwing up, and still…ugh. I finally shook the coughing after I found a place to sit and eat a snack of hummus & pita.

My son was still standing and I asked if he wanted to sit on the bench to which he replied, “I don’t sit in the woods in Indiana.” I should have heeded that advice…chiggers got me on my foot and around my waist. Yes, I had on bug spray that specifically indicated that it repelled chiggers, in addition to ticks, mosquitoes, … WHY DO I GET CHIGGERS EVERY TIME I HIKE IN INDIANA??? WHYYYYYYYYYYYYY?

Putting aside my issues with bugs on this hike, it was lovely. It is obvious that a lot of pride goes into the maintaining of the trails at this park. Very much looking forward to a return visit! Hike On!