After hiking into the NOC and staying the night, most of the Dames went home. Lola, “Akela” and I scooted up to do another micro section before doing the I-81 shit show north to Maryland. OH, WHAT A SECTION!!!!!

We drove up to Garenflo Gap to park my car first thing in the morning. The last short section of “road” to the parking area is more like a rutted out driveway up to someone’s mountain hideaway, but the parking area itself was great! However, Akela vowed to never drive her Toyota minivan up it again. 😀 No worries there, my RAV4 made it just fine.

Off to Max Patch! 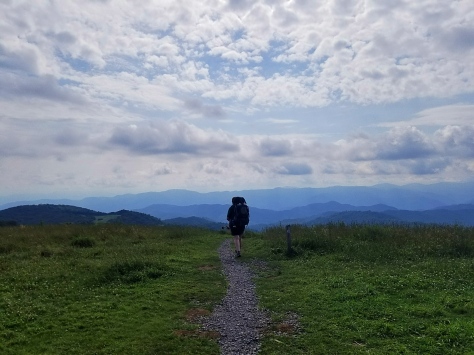 Oh my! This is my new favorite place on the planet! I’m sure it was made even more memorable with the fabulous weather. Big puffy clouds in a blue, oh, so blue sky, floated with the breeze as we reveled in the fresh cool air which had settled on the bald. 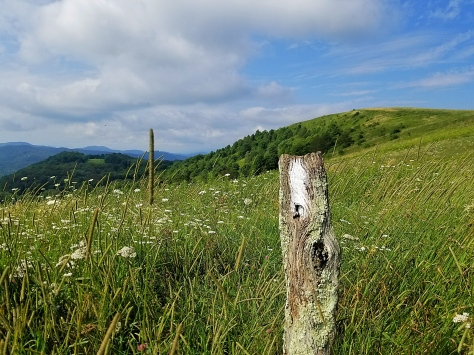 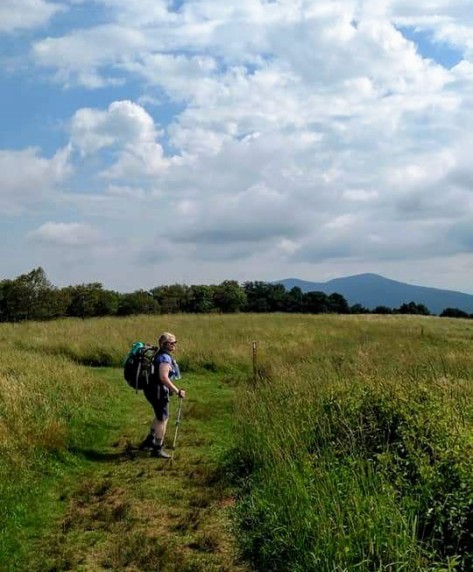 There was a lovely campsite just over the high point of the bald, then several more after we descended off the bald into an area that looked very park-like. Lush green grass, tall trees, almost Eden. We made note to include this section when we come back to head south into the Smoky Mountains. A little further down the trail is Roaring Fork Shelter which also looks to be a delightful place to make camp!

All the way to Lemon Gap the trail was just a delight to walk. So different than the trail between Fontana Dam and the NOC! We were ready for a change and the trail delivered!

After Lemon Gap, we started back uphill and discussed hiking past the next shelter to the campsite listed on Guthook’s App. It seemed logical, I mean we weren’t tired and, add to that, big storms were moving in tomorrow. I would like to be out of Garenflo Gap, and down that sketchy rutted road before those storms moved in! 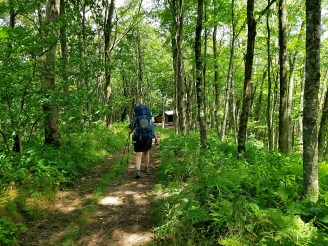 Well, of course, once we made the first campsite, we kept on to the second. The trail was overgrown waiting for that controlled burn we read about on a sign at Lemon Gap!

Now we were pooped! It was about 6??? Time doesn’t mean a whole lot to me on the trail, but I know it was after 5 o’clock when we pulled into the campsite. We had filtered water at a very low running stream that crossed the trail on the way down the mountain, my Katahdin sucked it right up, but Akela had to take a few more minutes to fill up her bag to use, oh what was it, a Sawyer? Anyway, it took a while. I love my Katahdin in times like these!

We set up camp, made dinner, enjoyed the sunset, then crashed! 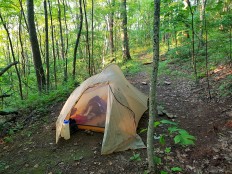 Sleeping soundly into the night, ahhhh!

I was surprisingly not startled by Akela kneeling outside my tent in the middle of the night.

“What?” *notices wind has picked up*

I’ll just say here, that I am not at all bothered by storms. I grew up in the Midwest and tornado warnings were just part of life. We lived in the woods and I loved a good storm. I don’t really want to be in a tornado, but a good thunderstorm is weirdly comforting to me.

The thunder rolled over the mountain singing me to sleep. I did keep track, for a while, to the time elapse between lightning and thunder and quickly realized, while a good lightshow was upon us, the storm itself wasn’t right ON us.

Akela wasn’t so sure. However, she eventually got back into her hammock. Maybe she went to sleep eventually. 😦

I was up early as usual, still raining, then another storm moved in. Akela and I texted back and forth…nice to have cell service at times like this! I packed up everything in my tent, except the pad I was sitting on, waiting to make my exit as soon as the rain let up.

I have been through this before…everything in the pack, pack cover on, rain poncho on…rain slows, then stops. Go time! Back out of tent with poncho on, place pack so cover keeps somewhat dry, deflate pad, disassemble tent…shove into pack pockets and get the heck off the mountain!

Nearing Garenflo Gap (thanks Akela for the pic!)

The rain did not return as we hiked down the mountain to my car waiting at Garenflo Gap. Sunlight coming through the trees filtered down in rays creating an almost postcard like scene. Thunderstorms don’t last forever! Hike on!

7 thoughts on “AT – NC Max Patch to Garenflo Gap”

This little Dark-eyed Junco is the fastest bird ever! I am surprised I caught him...and look at that side-eye he's giving me. 😂
Rocky Gap SP did not disappoint! Sublime afternoon walk! 💙☃️💙
Loading Comments...
%d bloggers like this: