Early last Thursday morning, someone hit my car and luckily left a note.  What started as an “oh crap” day quickly turned into a “oh yes, I get a nice rental car, and I don’t have to pay for it” day!  Right then and there, I decided that it was high time for a road trip to Shenandoah National Park to take a hike!  Little Caesar was game so we set off Sunday morning and found a nice part of trail to hike.  It wasn’t a long hike but had a nice climb and some beautiful views!

The trail head, coming from the north entrance, is just after milepost 14.  It is not a paved lot, just a grassy area.  Only one other car was parked when we got there around 11:30 AM.

We took an obligatory pic near the trail head then started north up the trail…then decided we really wanted to go south!  So we turned around and headed back down to the lot.  We stopped at the car and got some gloves and hats.  There was a brisk chilly wind blowing!

We saw several hikers on our way up the mountain.  This was the second weekend after the government shutdown so people were there in droves, even though the leaves were past peak.  It is a relatively easy climb coming south and soon we made the summit!  Little Caesar took a catnap in the sun while I climbed out on the rocks to see what I could see.  The view from the summit was limited, but it was a nice place to sit and contemplate the universe for awhile … and eat some snacks! 🙂

The way down however has some magnificent views!  Wow!  Real stunners!  We stopped and took pictures…but in many we couldn’t bring ourselves to look away from the view in order to smile for the camera.  😀 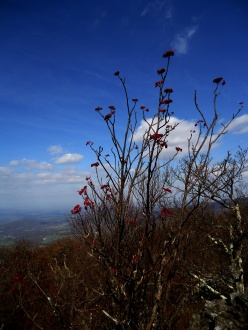 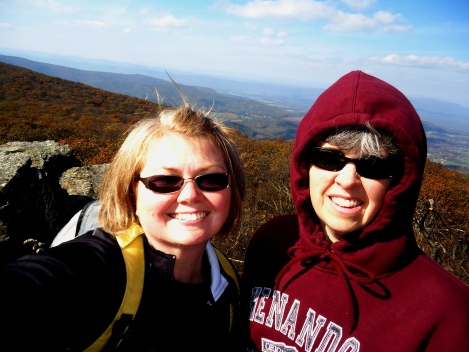 So yes, my car has $1500 worth of damage to it because a guy in a silverado thought he could pull into the parking space in front of my car…bwahahahahahaaaaaa…and now I am road tripping with Little Caesar in a car that makes it seem like we’ve actually done something that made us financially sound in our lives! 🙂 🙂 🙂  Sweet!

I am pretty proud of myself for cooking lunch instead of having a cold sandwich!
Seems Summer is waning, although you couldn't tell yet by the temperature! The crickets started singing loudly about two nights ago. Bring on Fall!
Loading Comments...
%d bloggers like this: