Saturday morning I headed out at 8 AM for Sugarloaf Mountain.  I was leading a hike for Trail Dames (Maryland) at 9 AM and wanted to make sure I had enough time to get there to meet the Dames as they arrived.  Well, it was a good thing I left a little early as I was greeted with a full wind shield of frost on the car!  Now, my car is 10 years old and the heat…well, the heat is sporadic at best.  Actually, manic – depressive is probably the most apt description.  I either get hit with heat so hot I have to crack the windows, or air that feels like I have opened a freezer.  Anyway, the point is, defrosting the window was going to take a little time! 😉

Luckily, the coin flip was in my favor and soon I could see out the front window!  Off I went to Sugarloaf to meet the Dames.

It was going to be a beautiful day.  The sky was blue and as I passed a few farms along the way, I sighed in content at the frost covered corn fields.  Yes, this was autumn.  The crisp air, the sharp smell of wood smoke, and the rattle of bare branches on trees as the cold wind of winter tried to bully its way in.  I was really enjoying the morning drive to the mountain…of course, my heat was working which added to my contentment! 🙂

On the mountain I found 3 Dames already in attendance.  We waited for the rest of the group and after two rounds of introductions, we got moving…30 degrees this morning!  We followed the blue trail down the mountain.  Many of the leaves had fallen, which, in addition to the rocky path, made for slow going.  The leaves were a little slippery and a wrong step would have resulted in a none too pleasant fall on quite possibly a very pointy rock!

Once down the mountain we crossed Mt. Ephraim road and started the climb up to White Rocks.  Now, at this point, you may be wondering why I haven’t illustrated my post with some trail pictures.  Well, here’s the thing.  I did take my camera and it had a memory card and fully charged battery but when I took it out and tried to snap a photo of the Dames I got this message “the memory card is locked”.  Whaaaaaaaaaaaaaaat?  How does that even happen?  Anyway, I will insert one pic of the Dames at White Rocks which I stole from Boomerang.  (I made Boomerang an official co-leader on this hike, so it is only right that the leader should steal the co-leader’s pics when her own camera fails her 😉  ) 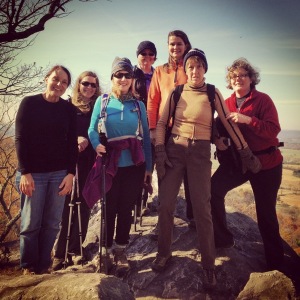 We made it to White Rocks and had a moment with the beautiful view to the west of Sugarloaf.  I say a moment because it was really too cold and windy to stay up there for long!  I suggested we head to the big cairn in the woods to have a break.  The Dames were in agreement so we continued down the blue trail rolling up and over the hills.  The cairn is on a lesser summit and turned out to be a lovely spot for a break!  Great logs to sit on and the cairn provided a little shelter from the occasional gust of wind.

After our break, it was back to the ups and downs.  In the summer there are no views along this part of the trail, but in winter, wow!  We could see the surrounding ridges and countryside throughout most of the hike.  The sky was so blue and the sun shown through golden leaves that had yet to fall.  Just beautiful!

We finished our hike 4 hours after our chilly beginning, it was now a balmy 53 degrees!  Lovely day with a great bunch of women!  So glad we were able to share this time together!  The Maryland Trail Dames rock!!! 🙂 🙂 🙂