Nothing like a brisk hike in freezing temps to kick off the New Year!

I had ulterior motives for this hike…I wanted to try out my new Esbit stove…but I will get to that later.

So off we go!  A balmy 25 degrees as I sat and shivered waiting for my car to heat up.  Oh, but it was lovely.  Bright blue skies, no wind.  This would be a good day for going uphill!  And uphill was exactly what I had in mind.

I met Tenacious D at the trailhead for Annapolis Rocks on the Maryland Appalachian Trail.  The plan was to hike up to the rocks, then back down to Pine Knob Shelter for hot chocolate. 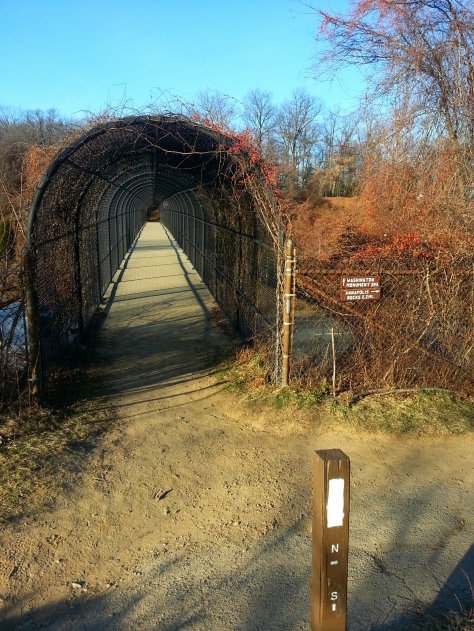 The footbridge over I-70 heads to the Washington Monument. We veered right and up the mountain.

It soon became apparent I was going to be plenty warm. 😉

I was ambling slowly along, thinking about all the possibilities that a new year brings, when I came upon trail zen.  I added a pebble to the top of the pile while thinking about my goals for this year.  It will take me some time to sort through my accomplishments from the past year, reflect on who I am now, and make new goals for the coming year…just cannot be rushed. 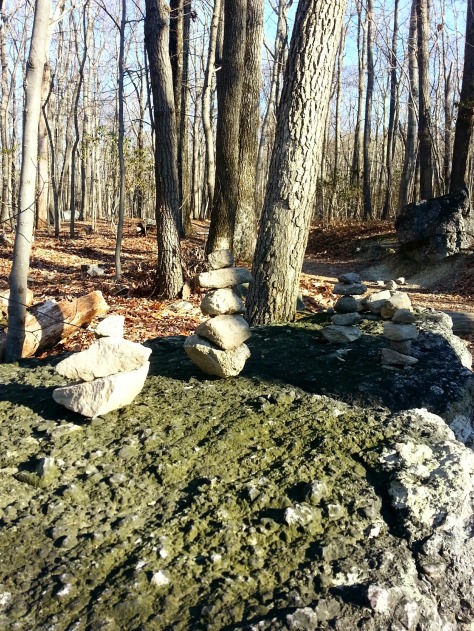 Zen on the Trail! How appropriate for a New Year’s Hike!

The views from Annapolis Rocks were absolutely stunning.  Despite the cold wind, which had begun to whip around and through us, we sat on the outer reaches of the rocks and took in the view.  I could see all the way out to the “cut” on I-68, driving that is about 50 miles away!!!  Wow! 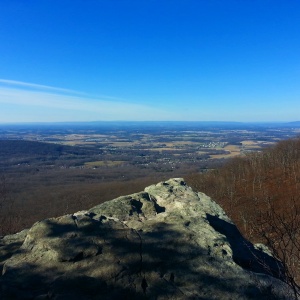 Then chilled, as in we couldn’t feel our faces, we turned away from the rocks and headed back down to the shelter where I would attempt to make hot chocolate with the new Esbit stove.  I bought this stove for the upcoming “Shiver in the Shelter” held by the PA Appalachian Trail folks.  Rumors abound that the canister fueled stoves, like my pocket rocket, would not work well in colder temps, hence the purchase of the Esbit, which burns fuel tablets.

It was maybe 32 degrees,  when I began to heat water for hot chocolate. After the first tab burned out, the water was steaming so we attempted to make our hot chocolate.  Took a sip…ewwww…not even warm!  Apparently, it does not take much to make a pot of water steam when it is freezing out!  We threw our chocolate back in the pot and lit another tab.  That did the trick.  So …took two tabs…if I had wanted a rolling boil it would have taken three. It WAS fricken cold out with a slight breeze, so a wind screen would probably been beneficial.  Each tab took about 9-10 minutes to burn out, so 20 minutes for hot chocolate for two travel mugs. Not bad. Not great.

Oh…and I didn’t have any issue with the smell…and I was expecting the worst after what I had read about the “fishy” fumes. 🙂

The Esbit in action! 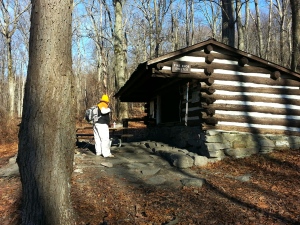 The picture is of Try #1, notice the handles on the pot getting licked by flames?  Yeah, I fixed that with the second try!!

Keep Learning and as always…Hike on! 🙂

BoobOnARock & Tenacious D on the up to Annapolis Rocks! Happy hikers!

10 thoughts on “Kick off the New Year! Annapolis Rocks & Hot Chocolate in the Shelter”

This hike was sooooo needed. Thank you @back_2_better for hiking with me today at Rocky Gap State Park! We hiked up to the Mason Dixon line and into Pennsylvania. It was a little rainy this morning, but skies cleared for our hike...and the sun came out at the end! A good day on the trail. Now it's back to work...booooooo!
The prompt for Day 24 of #SeasonoftheWitchChallenge is:
Loading Comments...
%d bloggers like this: