A couple of years ago I was hiking on the C&O Canal up by Shepherdstown, WV when I crossed paths with a woman who had hiked up from Harper’s Ferry.  I had never thought about hiking to Shepherdstown from Harper’s Ferry.  Since then I hadn’t really ever stopped thinking about it.  I mean, it would be really neat to walk to Shepherdstown and have a great lunch, wouldn’t it?  Well, wouldn’t it??? I finally got the chance to find out! And a few hiking pals willingly agreed to come along. 🙂

We met at the C&O Canal across the river from Shepherdstown, then shuttled to Harper’s Ferry.  Thanks to hiker pal Thelma we were sporting a national park pass and did not have to pay to park at the train station in Harper’s Ferry!  This was a good sign, as were the sunny skies, warm sun and bathrooms in the train station. 🙂

We left our hiking poles in the car, joking about how tough this flat hike would be.  Queen V commented on the “strenuous” elevation gain as we walked up the ramp to the railroad bridge that crosses the river to the canal.  Crossing the railroad bridge, we descended the spiral staircase down to the canal and headed north to Shepherdstown. 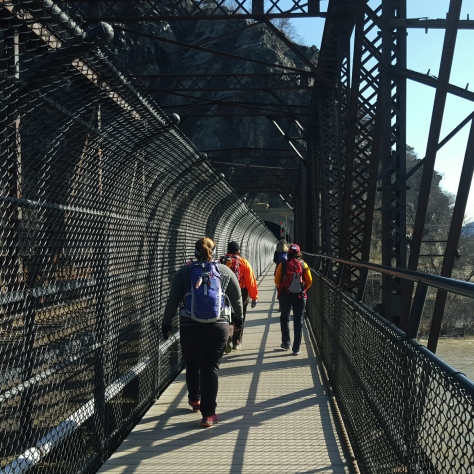 Chatting lightheartedly, we walked briskly and the miles flew by.  At the first campground hiker pal L promptly tried out a “chair” she found.  Dargans Bend at mile 64.9 called us in for a quick break and stretch, then we were off again! Still all smiles! 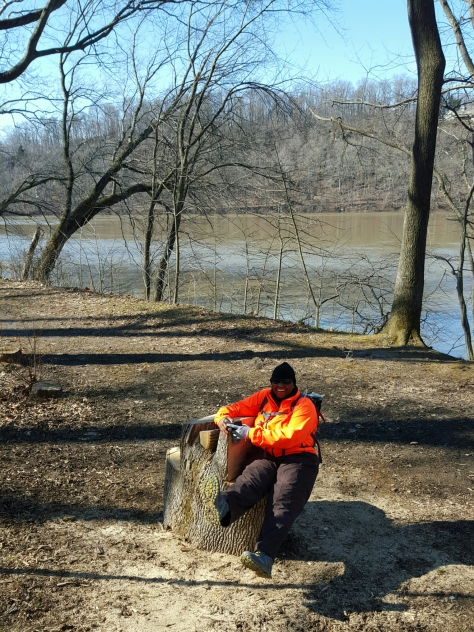 The Potomac River was moving fast in the other direction. Small white capped waves bullied their way south, made ever stronger by the recent heavy rains and melting snow. As beautiful as the river was, after so many miles, it made me feel as if on a treadmill.  Walking, ever walking, were we getting closer?  Except for the small brown mile markers that counted  down the miles, there was no way of knowing. 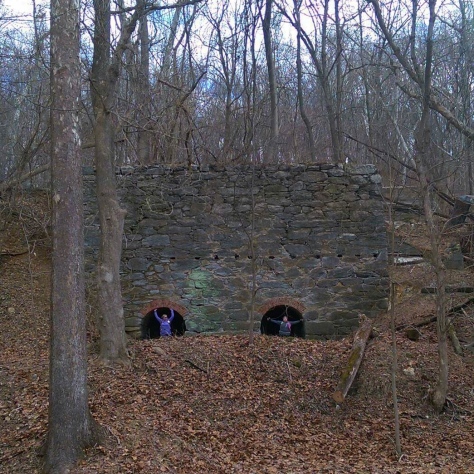 Thanks to Thelma for this pic!

Near mile marker 65 Queen V and I explored some old limestone kilns and soon after I was pulled off the towpath once again to explore a cave with Anna Marie!

Then we stomped on to Antietam Creek campground.  Arriving at the campground, it was time to sit down and get off our feet!  That flat walking was taking its toll on all of us.  While we sat there at the campground I kind of drifted off into thoughts like, “I should’ve brought another pair of socks…I hope these sore spots on my feet aren’t blisters…shin splints? No not even thinking about that.” then I looked to the blue, blue sky and caught a glimpse of … is that a…yes, oh, then out loud I exclaimed “hey look!!! an Eagle!!”

It soared majestically overhead, circling higher and higher, then moved on regardless of how hard we willed it to come and roost in the trees nearby.

It was now time for us to move on as well, not too much more now!  We can do this! We passed mile marker 71, then 72.  Wait, wasn’t that supposed to be the last one!  We had come almost 13 miles.  My steps were slow now.  Just one foot in front of the other.  It was getting harder. My legs were stiff, and the threat of shin splints was ever greater.  No, no, no! That will not happen!  I took my head out of the pain and focused on the cold beer and taco salad that would be waiting for me in Shepherdstown. 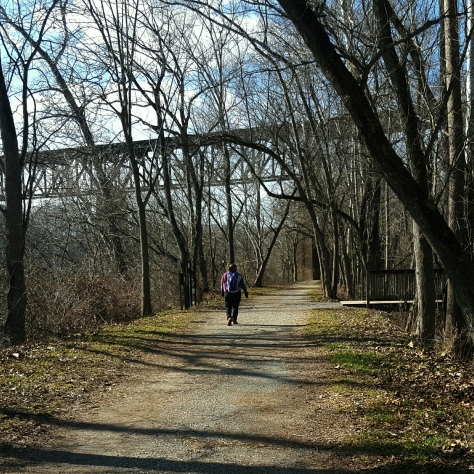 It worked…I slogged that last mile with dignity (as excruciating as it was to lift each foot and put it down on that blasted hard packed gravel covered canal). Arriving at the car I was definitely ready for comfort and cursed my lack of forethought in leaving my flip flops back in Harper’s Ferry.  I fell into Queen V’s brand new car, feeling slightly guilty at leaving mud on the passenger side floor mat.  But then we were moving.  Oh the pleasure of a car after a long, long, walk!

Follow the Potomac River west from Washington, D. C., oh, I’d say about a hundred miles, or so, and you will come to a sweet, little river town that was once in the running for the capital of the United States.  Williamsport, Maryland was reviewed by none other than George Washington for a possible location for the United States capital!!  Even though it wasn’t chosen as the capital…well, I am sure it was an honor just the same!

I headed to Williamsport to do some flatland hiking since it was way too hot and humid to climb a mountain today (for me anyway 😉 ).

Williamsport is a cool river town with the Potomac River forming a natural boundary on the west and Conococheague Creek hemming it in on the north.  The C&O Canal runs along the Potomac River.  Many bikers were already on the Canal or taking a break at picnic tables when I rolled into the parking lot. 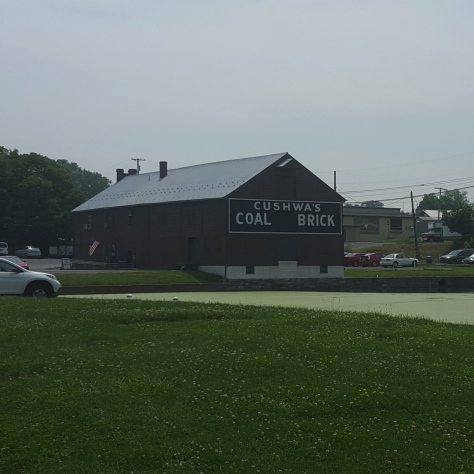 Another large group of young folks were on their way to the river’s edge with fishing poles, buckets, and bait ready for whatever the river might bring them today.  It was quite a bucolic setting to behold.  I changed out my flip flops for walking shoes then set off to stroll upstream along the C&O Canal.

Of special interest is the crossing of the Conococheague Aqueduct.  The aqueduct is currently undergoing restoration but is still part of the C&O Canal so can be used during restoration.

One convenient aspect of the Canal is having mileage markers!  Walkers, bikers, or horse riders can keep track of how far they have gone.  I planned on hiking 6 miles, so I noted the first mileage marker, and knew I would need to turn around at mileage marker 103. Side note…One of drawbacks of the Canal is usually having to retrace your footsteps in the opposite direction to get back to your car.

It was a hot morning and I could feel the heaviness of the air settling over the river and the Canal. Occasional breezes which made the towering trees rattle their leaves did little to alleviate the heat and humidity that seemed to surround me. I am indebted to the birds that distracted me with a variety of melodies and, lucky me, an owl also hooted a welcome!

Each section of the Canal takes on its own personality.  At the beginning of my hike, and probably for a mile or so, there was farm land on my right and the Potomac River to my left.  A farmer was out on a tractor… Oh, I cannot tell you how welcoming it is for me to hear a tractor out in the field! I hail from southern Indiana and this sound takes me back to a place in my childhood that brings a feeling … of what…happiness? well being? comfort? love?…hard to describe, but good, good, good! 🙂

Then the farmland disappeared and all I could see is a huge rocky wall.  Boulders have fallen into the Canal here and the whole place takes on a rugged look.  I thought about whether it would be possible to climb to the top of the rock wall, just to see over to the other side, but it looked rather overgrown and vertical. And I was hot…well…that energetic, rock star moment didn’t last long. 🙂  Back to putting one foot in front of the other!

Quite a few bikers with packs were making their way down the Canal today.  I enjoyed the whoosh of air that accompanied them as they flew past me in groups of two, four, and more.  I was hoping for more as I neared my car and the end of my hike! 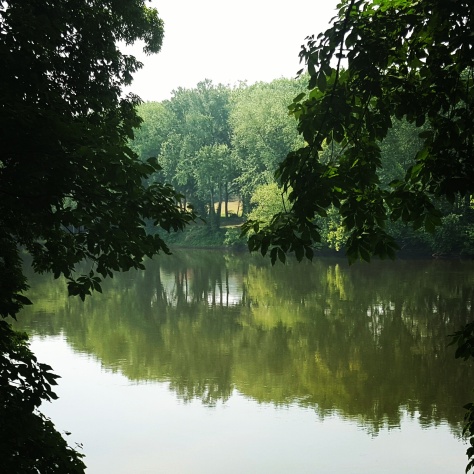 I trudged up the short incline to my car and ripped off my shoes and socks.  I could not put my flip flops back on fast enough!

Ever have that feeling you have to get out in the middle of the week even though you don’t really have the energy to do it… That was today.  I got home from work at 4:30 pm.  Fed the pack, then hemmed and hawed over whether it was worth it to drive in rush hour […]