Oh, a hike leader’s lament! Over the last several weekends the Mid-Atlantic has had some questionable weather. This led to the shuffling and rescheduling of hiking events. Ugh…when is there ever enough free time for hiking?

Whelp, I looked at my calendar…classes end May 13, semester wrap up is the following week, then back to prepping the house for the floor guy (not to mention summer classes). Hmmm 🤔

All hikes were rescheduled to the week that is ending today…and WHAT.A.WEEK! A whirlwind of work and hiking and everything else! 😄

Tuesday found the Maryland Dames and me at New Germany State Park out in the far western portion of Maryland. Friday we scampered over Catoctin Mountain Park, and today, Saturday, we had a Meet & Greet for new Dames!

Catoctin Mountain Park was a different, but still delicious, experience! It rained just before the start of our hike and the scent of the mountain woods was fresh and soothing. Moss covered boulders, bright green foliage, and a variety of wildflowers and fungi kept the hike interesting…not to mention an unexpected Tornado watch! We skedaddled soon after that alert. 😄

And finally, the Meet & Greet at Monocacy National Battlefield, Worthington Farm! A super morning meeting a few new Dames! Worth every bit of my Saturday morning!

It was a busy week…but overscheduled hiking events? I’m in! Hike On!

Being a newly minted homeowner in western Maryland has had me hopping the last few weeks. Painting, cleaning, get the boiler serviced, have the roof checked, then the chimney…and by the way, how about a washing machine break down? Oh, does anyone have availability to refinish wood floors BEFORE October???

Left it all behind today! Headed west on I-68 to New Germany State Park, which is now only 30 minutes away from me!!! This park is in Garrett County, Maryland and is a beautiful oasis of Hemlock trees. Cathedral – like actually!

Stopping at the ranger station first, I was disappointed to find it closed. Dang pandemic. The last time I was here it was for a Trail Dame campout…and Ranger McDreamy was on shift that afternoon. Maybe I was hoping he was going to be here to greet me??? 😀 😀 😀

Sadly, no such luck. I continued down to the Savage Forest kiosk and picked up every single map and brochure for later reading as I eat a pizza that I am absolutely getting after this hike! Shoved them into the compartment on the driver’s side door then pushed on to the park proper and found an empty parking lot next to the Hemlock Trail. Perfect, Let’s go!

The Hemlock Trail is roughly a mile of beautiful forest. I followed it down to the Turnpike Trail…I can only guess the history of this trail is that it was a road…but I couldn’t find any info to support that from my trusty research assistant, Google, not to be confused with my hiking gal pal, Google. ANYWAY…it was easy to walk and pleasant as it runs just to the left of a lively brook that bubbled away as I made my way towards the Dynamite Shack Loop!

I cannot think, write, or say the word dynamite without thinking of JJ Walker saying DY-NO-MIIITTTEEE! 😀 That was a great show!

The Dynamite Shack Loop started with Hemlocks, but included a very sunny long climb as it pulled away from the creek. I am not even going to try to pretend I am in shape at this moment in time…it sucked!!! I took a few breathers and enjoyed the blue sky and a few spring flowers. Once at the top there was a little extra credit loop that went a little further uphill. I cannot believe I took it! I was worried there might be a view I might miss! (update: there wasn’t)

Back on the main trail, it was now down, down, down, but gently and back into the Hemlocks. Ahhhhh, just as I visualized sitting down for lunch I turn a corner and there was a bench! What???!!! When does that ever happen?

I took that bench!

After a lunch of Peanut Butter & Jelly plus leftover blue tortilla chips, I packed up my wandering thoughts and headed downhill once again, now on the Dog Leg Loop…omg, these trail names! 😀 I could have cut over to the easier Turnpike Trail, but no, didn’t do it. This is go big or go home time! I stayed on the Dog Leg until it merged with the Acorn Loop (fyi, I saw no Acorns). That trail eventually merged with the Turnpike Trail, which took me to the Lake and the end of my hike.

I still had to walk down the road to my car, but it wasn’t too bad in terms of traffic. The day was still just as gorgeous as could be as I walked up towards the Lakehouse. Several folks were out fishing, a few rangers were clearing out the garden, and a family sat on the beach soaking up the sun. *happy sigh*

No Ranger McDreamy, I guess I will have to eat my disappointment. Now, where did I put the number for the pizza place? Hey Google… Hike On!

A camp out with the Dames! A new state park to explore! Sidekick Pauli was coming! Triple yay 🙂 🙂 🙂

I love to plan fun stuff for our Trail Dame chapter to do and this was no exception.  A camp out was a great opportunity to chill out on a beautiful Autumn weekend in western Maryland.  I had never been to New Germany State Park and was excited by the prospect of hiking somewhere new. 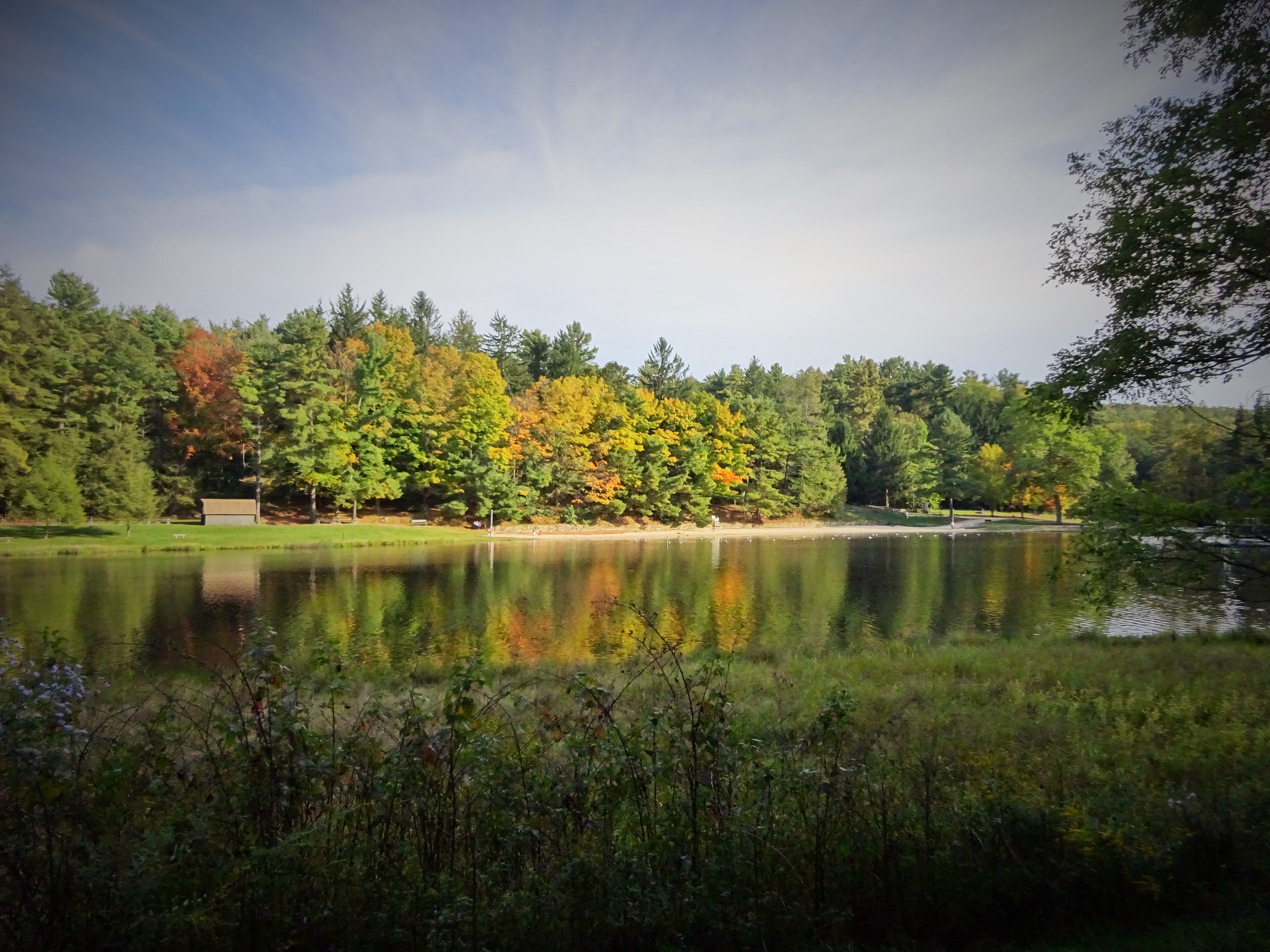 A few of the Dames are beginner backpackers and wanted to try out their gear over the weekend.  This turned out to be a super weekend for that too!

We all started arriving at the park on Friday afternoon.  Tent went up quickly, then I went up to the park office with Queen V to buy firewood…a campfire there would be!

The park office was not hard to find.  The ranger asked us if we wanted to go on a trail run he was going to lead that weekend.  Politely declining, and somewhat flattered that he had asked, we went to grab our firewood and return to camp.  Now, Queen V and I, well, we are lesbians,…but as we left, I leaned over to her and asked, “Was that guy hot?”  because I’m never quite sure, but my temperature was certainly elevated 😀 and she practically cut me off replying “OH MY GOD, he was so hot!!”  Like, so hot, I was ready to attempt trail running…no lie.  He was fondly referred to as Ranger McDreamy (coined by Queen V) for the rest of the weekend! Ha!

A pay phone? One can make two calls for free from this phone…911 or a number that links you to pastoral counseling…good to know 🙂

Fanning ourselves as we returned to the campground, I found a few more Dames had their tents going up. Oh, what a site! We had taken over the small tenting loop. Our, all ours! Okay, one site wasn’t ours…it had been…then that particular dame decided not to come and gave her site away. 😦   For SHAME!!!

Our first hike was Friday evening, a casual stroll from our tent site to the lake, then along the Orchard Loop and back…maybe 2 miles.  Just enough to start bonding with everyone and make the transition from busy life to restful weekend!

Heading up the Orchard Loop

Afterwards, I built a fire and hung out long into the night (maybe 9:30) with the Dames.  B^2 had brought pie, Roxanne brought home made caramel corn, and Queen V brought sausage for Sidekick Pauli! These women are the best! 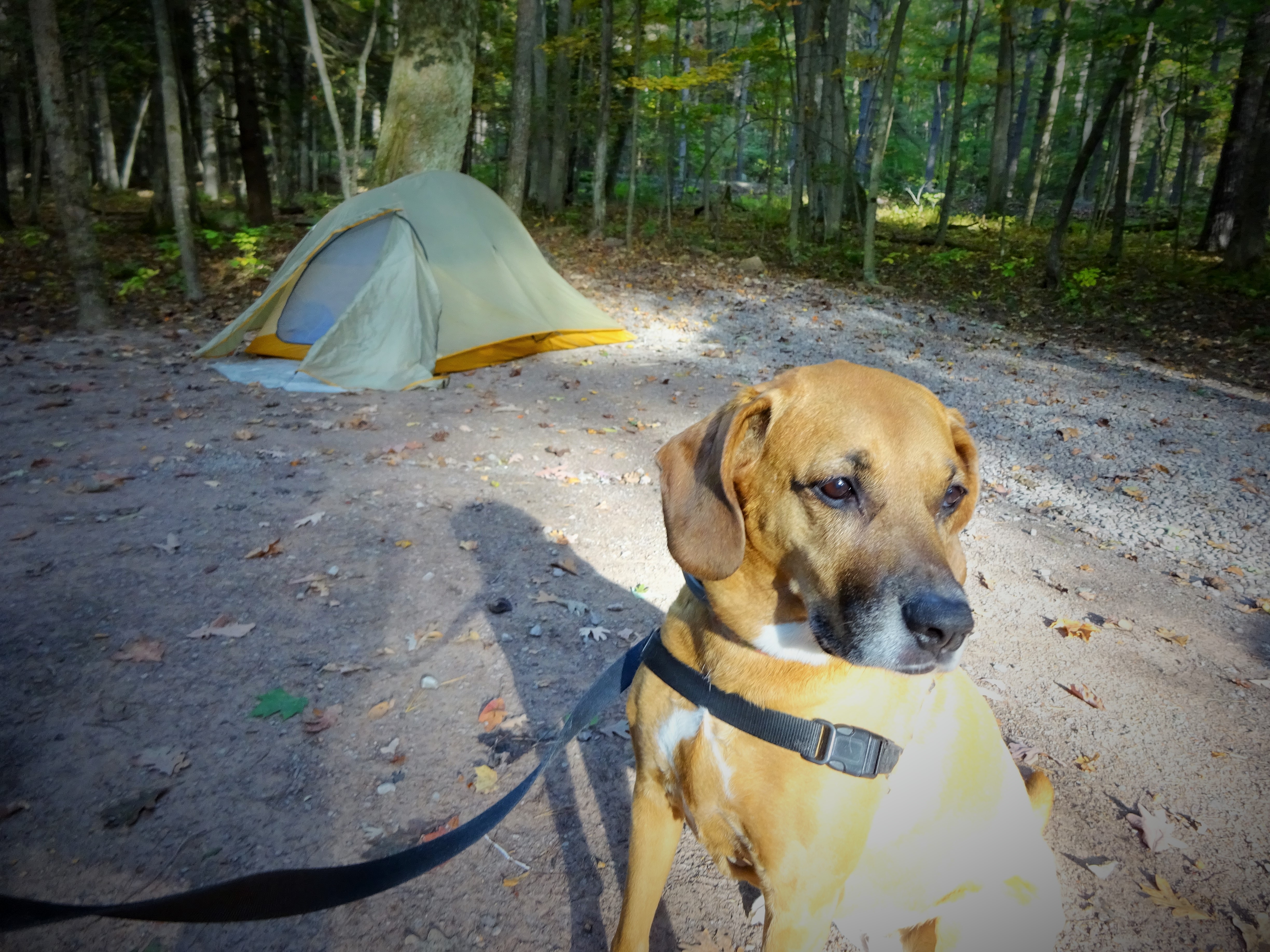 The next day we took a longer hike starting down by the lake, circling the other campground, then taking the Cabin Loop to the Turnpike Trail.  The trails are altogether lovely at this park and, in the winter, are groomed for cross-country skiing. 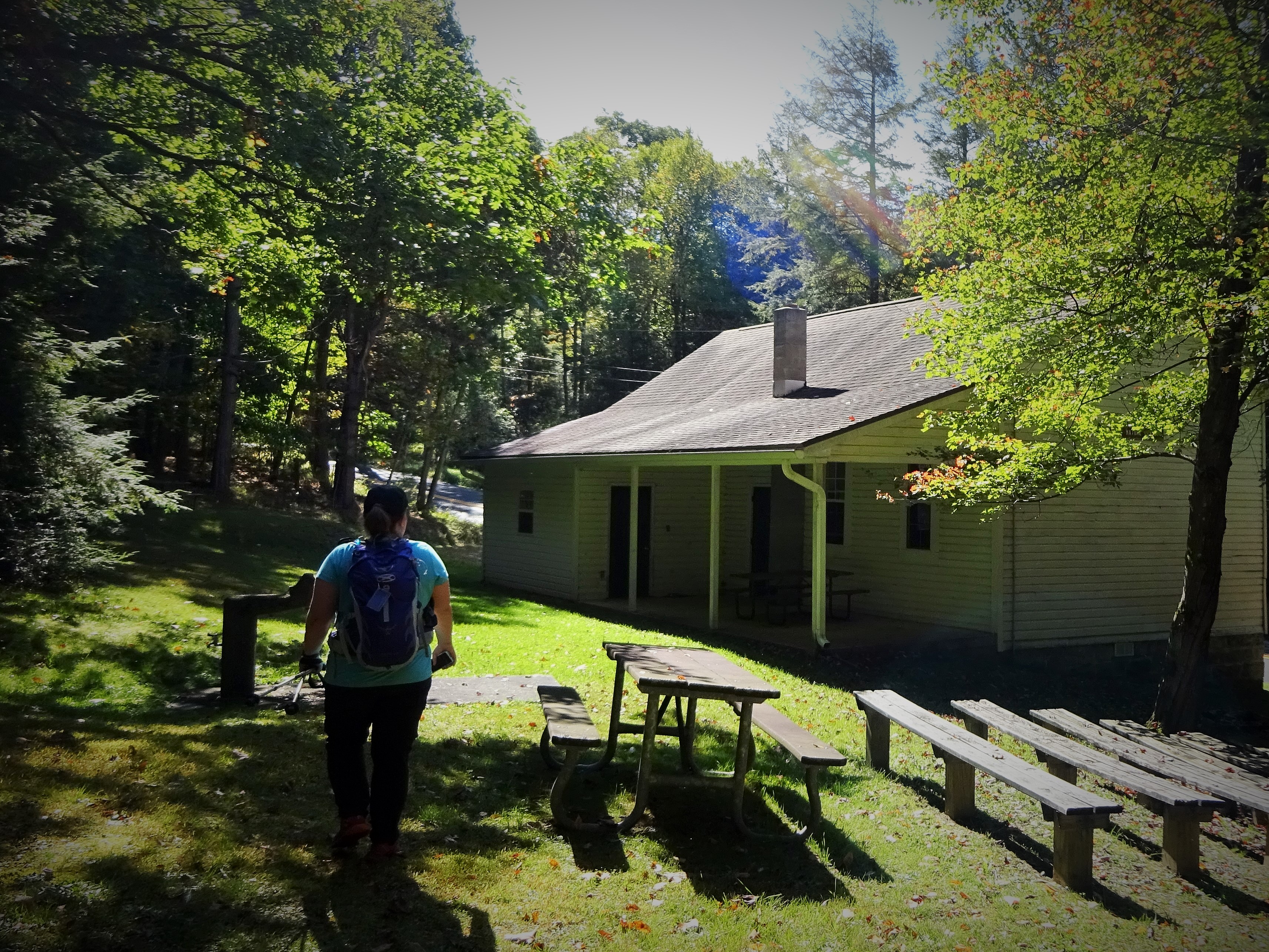 Along the way, a must stop was the old school house.  Yeah, I’m a teacher, so historic places having to do with education are right up my alley! Don’t think I haven’t fantasized about being a teacher in a one-room school house. 😀 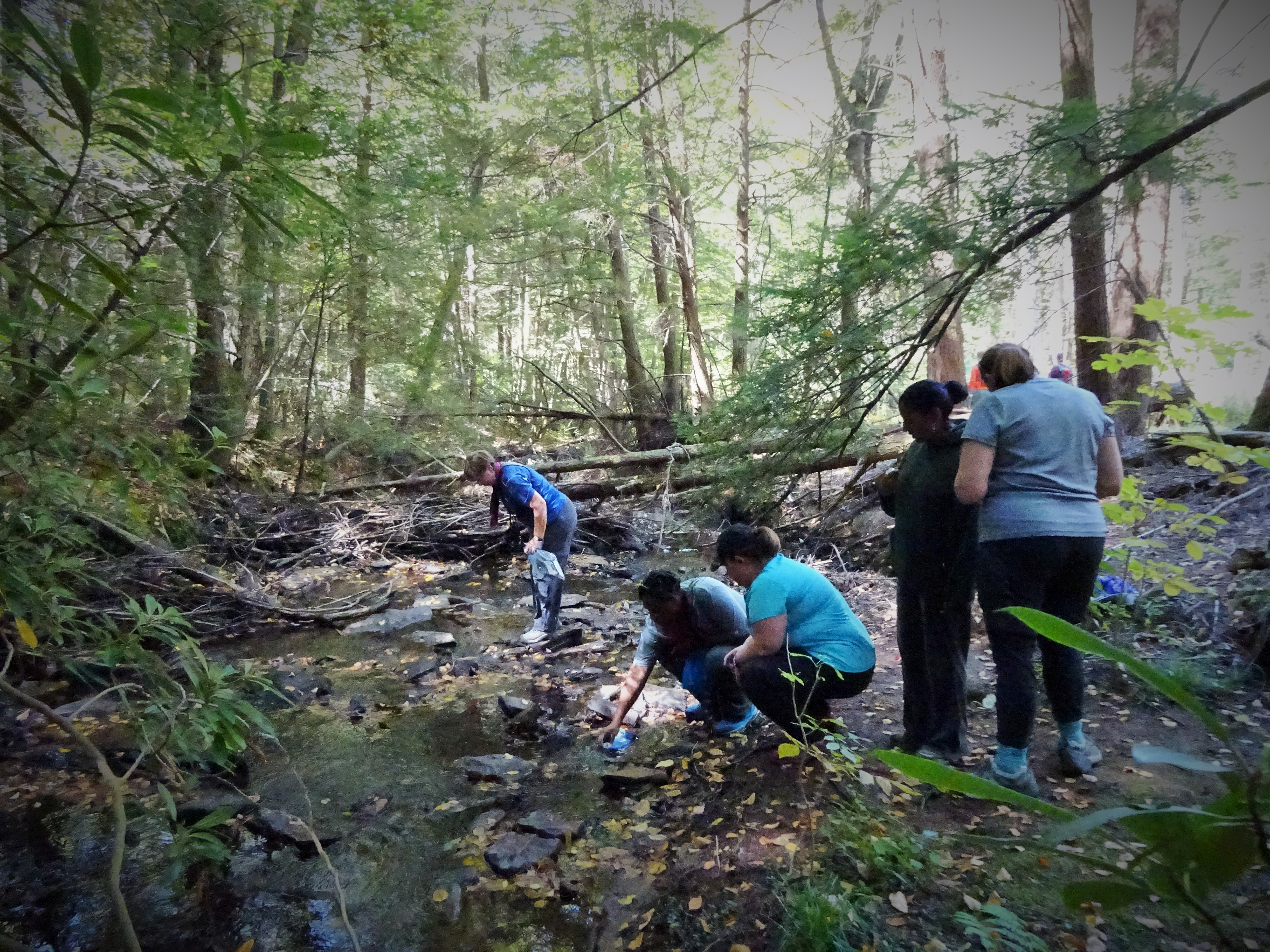 Later on during the hike, a few of the Dames tried out their water filters.  This was a great experience for these Dames! Do you remember the first time you filtered watered out of a creek and drank it?  The initial hesitation, the wonderment, then the satisfaction of drinking the water that you had filtered?  I saw all of this as I watched from my perch under a shady tree.  So proud of these gals!

We returned to camp for lunch and backpacking chat, which was then followed by a backpacking gear demo by none other than Venture Scout leader extraordinaire, Lola! Wow, her mini-van must have been packed with stuff.  And how absolutely selfless to bring it to our camp out and demo it! The backpackers, new and old, got a lot of great ideas during our day of learning!

Saturday evening the park was providing a “Star Party”.  Most of the Dames chose to walk back down to the lake except for Queen V and me.  I decided to drive because my old Pauli girl was pooped and wanted to sleep in the car.  The Star Party was awesome! We could see the Milky Way without any special telescope and many satellite fly overs (even the Russian satellite passed over).  Clear skies and very little light pollution made for a wonderful night under the stars!

Looking toward the Lake House

It got a bit chilly as we all made our way back to our campsites in the dark.  We gathered round around a roaring fire and made s’mores to cap off the day.   I was so happy to crawl into the tent with my warm Pauli as the temps kept dropping. 🙂 Happiness is a warm puppy! 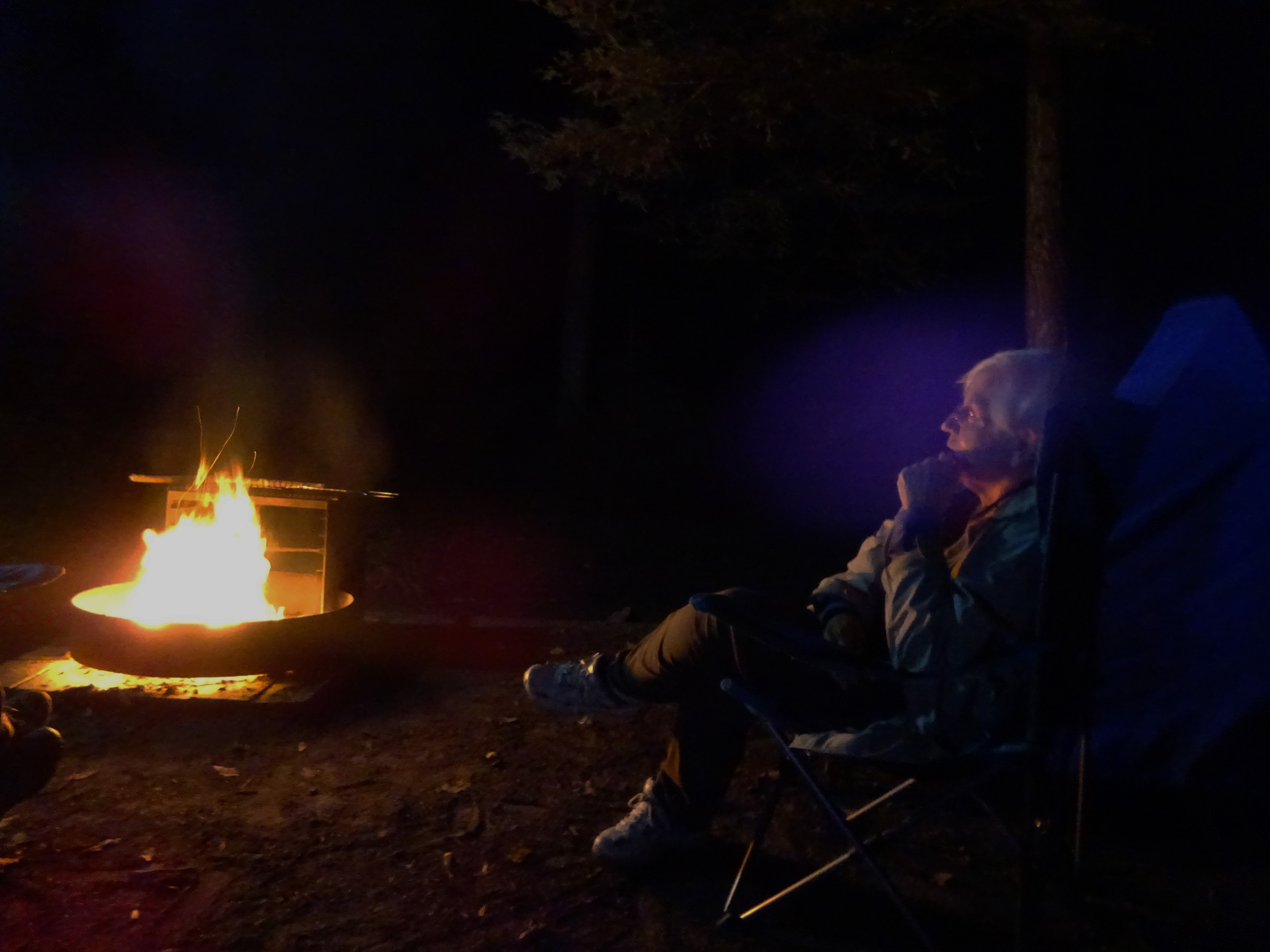 Sunday was a lazy morning.  No hikes planned, just clean up, take down, and drive home.  I was very sad to leave! These Dames…amazing! Hike On!