What do I want for my birthday, more than anything else?

Luckily, I was able to set out with Sidekick Pauli this morning to explore the trails on Worthington Farm, part of the Monocacy National Battlefield, in Frederick, Maryland.  Too bad Little Caesar had to work 😦 or she could have come too.  I got up early with Little Caesar…5:30 AM…because I wanted to make sure I would be able to get to the trail in time to see sunrise.  So I ate breakfast, fed the animals…yes, we still have the foster kittens, in addition to our 2 dogs and 4 other cats…drank my coffee really slow, and it was still dark!  When does it get light anyway?  At 6:45 AM I could see a sliver of dawn. Ahhh! Finally! I left my house with Sidekick Pauli in tow and headed down to Worthington Farm. 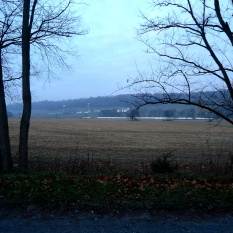 Walking up the Road to the Farm 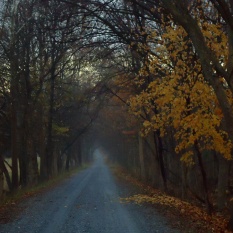 Imagine riding a horse & buggy up this road. 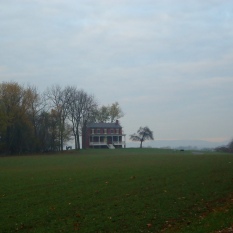 Arriving at the Big House 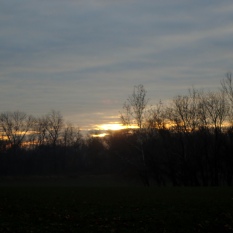 I parked my car in the lot by Baker Valley road and walked down the lane to the big house.  The park does allow parking near the big house, but I wanted to immerse myself in what it might have been like to live here.  What would it have felt like to walk or ride up that beautiful lane in a horse & buggy in the 1860’s?  The first 20 minutes of this hike, the lane to the big house, runs parallel to I-270 and as such tested my ability to keep myself in the Civil War fantasy world I was creating.  The traffic soon became white noise, however, and I was able to return to my mental meanderings. 🙂

Approaching the big house, I noticed a sign with historical information on it.  I didn’t want to read it just yet as I was content with the world I was imagining up about this place, so we skirted off to the left and into the woods on the Brooks Hill trail.  As all trails around Frederick at the moment, it was rocky and covered with leaves!  In addition, it apparently rained last night.  So I pulled in Sidekick Pauli and took my time! 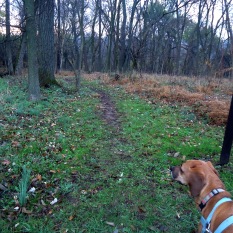 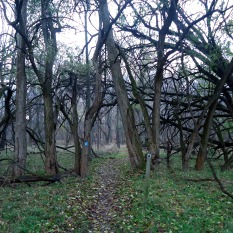 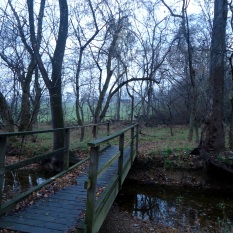 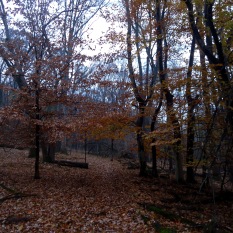 Careful! There are rocks under those wet leaves!

Baker Valley looked absolutely pastoral from the top of Brooks Hill.  A little fog had taken off the rough edges and seemed to make the place timeless.  I could no longer hear the traffic on I-270, in fact, even though I was looking in the direction of the highway I could not see it at all.  It had disappeared in the mist, fantastic!  And then like magic, in the middle of the field, appeared a large buck with a pretty impressive rack.  He hopped off before I could get a picture.  I don’t think any picture could have done him justice anyway! 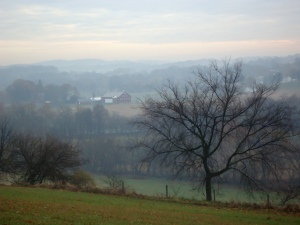 It seemed the deer herd was ahead of us for the rest of the hike.  We would hike about a hundred yards or so, then the white tails would go up and deer would again bound up the trail and crash into the woods!  The deer were not the only animals we saw on this hike.  The trail cuts around the perimeter of a cattle field.  We said hello to a few cows coming out of the woods at the base of Brooks Hill, then saw a few more and the bull after hiking up Fords trail by the Monocacy river.

Base of Brooks Hill

A stop at the Monocacy River

The layers of Autumn 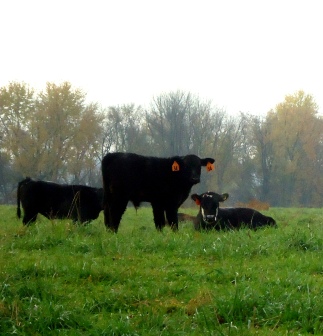 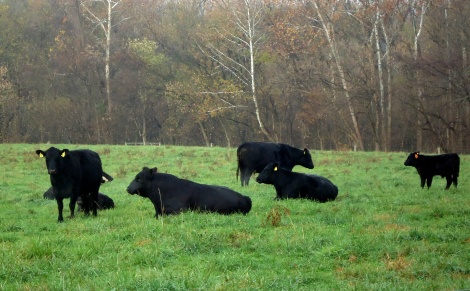 Arriving back at the big house, Sidekick Pauli and I checked out the porch.  Wow, I would LOVE to have that porch!  One mint julep please!  or since it was a chilly, damp morning perhaps a coffee with a little extra shot of something…  😉 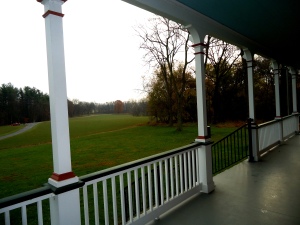 Before backtracking down the lane to my trusty Highlander, I headed to the historical signs.

Yep, I was there.

A hundred years before I was born, well, 103 to be more exact.  Here I was, standing here, and the only thing that was separating me from the battle was time.  Everything else was here…the house, the field, the mountains, the river…all present for the horror that ensued.  And now they see me, standing here, feeling very small in a world that seems to be all at once very big.  Because this moment I have here is fleeting.  This is one small moment I am experiencing.  A small moment built upon and now becoming part of a tidal wave of moments through out time and place.  The world is very big indeed.